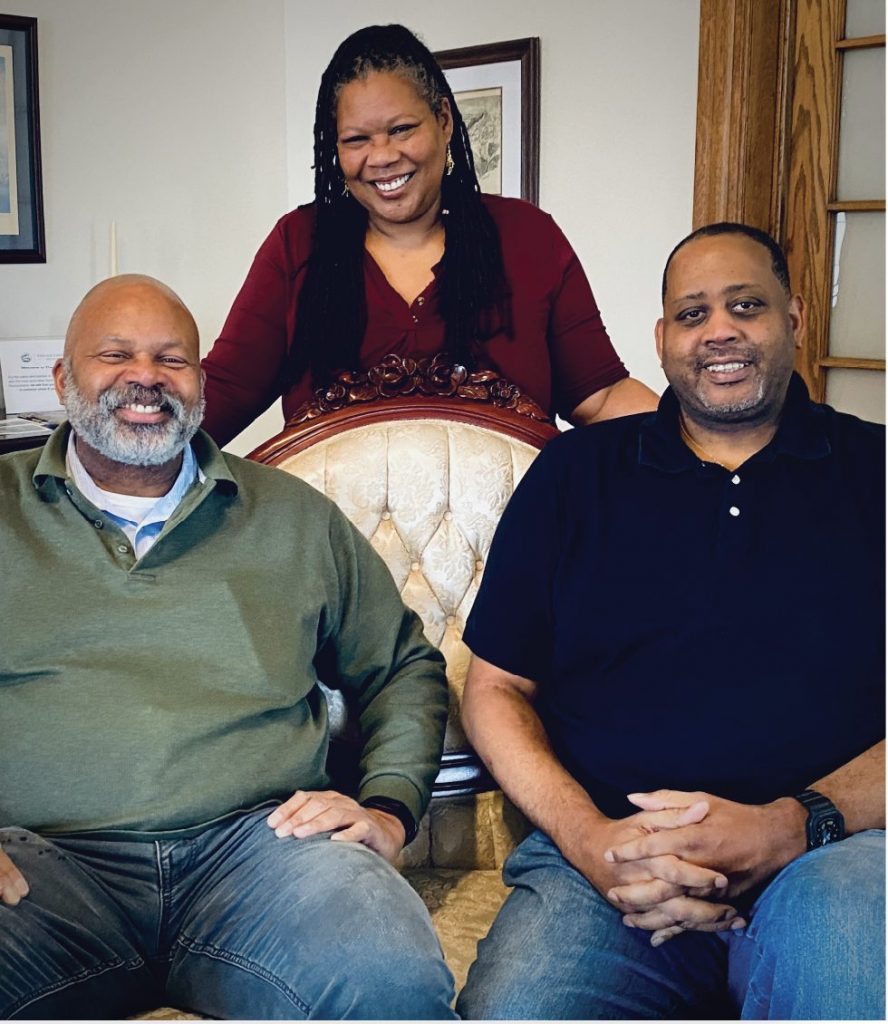 Gettysburg is a town known worldwide for its history, but there’s a new chapter being written in its supporting tourism industry.

“We really fell in love with this place. It was the location, the draw of history and tourism, the architecture, the historic renovation,” Patrick said. “We also fell in love with Gettysburg. Beyond the history, we’re loving that this is a great place for people who love the outdoors, it’s a foodie place, and it’s those type of things we enjoy when we travel also.”

What led them on this journey to B&B ownership?

Quite honestly, the Campbell family had a problem. No one owned a home large enough to host extended family gatherings.

“Three of us started flipping houses to get investment money to buy an inn,” said Patrick, 54, the youngest of six siblings. “And through flipping, we learned we could work well together.”

Their grandmother—one of 14 siblings—and family roots are in the Washington, D.C., and Maryland areas. So, when Patrick, Christine and Stephen began searching for the perfect B&B to operate, they cast a wide net through the Mid-Atlantic, including Maryland and Lancaster.

Their primary criteria? In addition to finding a property that could accommodate their own family holidays, they wanted to pay homage to a bigger-picture family heritage. They were seeking a B&B in close proximity to the Underground Railroad—a network of safe houses that helped slaves make their way northward from the South in the 1800s. Gettysburg-area safe houses played a vital role along the route.

That’s because, in Gettysburg, there was a fine line between slavery and freedom. The town is less than 10 miles north of the Mason Dixon Line.

While the Keystone Inn isn’t a Civil War-era home—it was built in 1913—its owners through the years have been pillars of the community. And the Campbells want to continue that tradition.

“One of the core values we share as siblings—it’s not enough for us to own a B&B and treat it as a business—we want to be part of the community also,” Patrick said.

He cites partnerships with Adams County wineries, coffee roasters and farms such as Apple Valley Creamery—breakfast at the Keystone Inn features their eggs, milk and yogurt.

But the Campbells’ sense of community goes even deeper.

“We’re very aware of the question, ‘What is the diversity of Gettysburg?’ One of the things we were happy to see, given the overall political climate, is that Gettysburg itself seems to be not only diverse but really promoting diversity, even before Rita was elected mayor,” said Patrick, referencing Rita Frealing, Gettysburg’s first female and first Black mayor, elected last fall.

That culture and tone is one that the Campbells now emulate as the eight-room Keystone Inn’s owners, as they roll out the welcome mat—especially for Black travelers.

“One of the things we discovered as we were going through the process of becoming innkeepers, is that B&B’s generally are not an option African American travelers consider,” Patrick said.

Leah Bell, hired by the Campbells as Keystone Inn’s innkeeper, sees the family as “part of a new wave of ownership—broadening our vision of what a B&B can be.”

The Campbells joined three B&B associations—the local Inns of the Gettysburg Area, the statewide Pennsylvania Association of Bed & Breakfast Inns (PABBI), and the African American Association of Innkeepers International (AAAii), with membership across the country.

“Less than 1% of inns are minority-owned,” said Monica R. Edwards, AAAii’s executive director. “There’s been more of a spotlight on supporting African American-owned businesses, so the AAAii website allows travelers to find Black-owned inns in one [online] location.”

And it turns out, the Campbells’ purchase of the Keystone Inn in mid-2020 was well-timed with a pandemic surge in B&B-based travel.

“As travel started to come back, our innkeepers were absolutely packed,” said Rose Mape, PABBI director. “Inns already had a high level of cleanliness, and I think the traveling public felt more comfortable staying in smaller properties.”

Many Pennsylvania B&B’s surpassed all occupancy records in 2021—an upward trend that’s continuing into 2022. The state, with 600-some B&B’s, has the second-most B&B’s in the country, behind California.

Being on the forefront of welcoming Black travelers to Keystone State B&B’s is a priority, Mape said, with the Keystone Inn’s Christine Campbell instrumental in leading the charge. Christine serves on the association’s annual fall conference committee, which is organizing a session on inclusion.

Groundbreaking work seems to be in the Campbell family genes. Patrick retired as a global enterprise planner with PayPal several months ago. Stephen, who earned a master’s degree in architecture from Harvard, is Lancaster’s director of public works. Christine, focused on the nonprofit sector, is a consultant to HUD.

The apples didn’t fall far from the tree. The Campbells’ parents were the first in the family to attend college. Their mother was a teacher and mathematician who worked with NASA’s computer systems in a position similar to those showcased in the movie “Hidden Figures.” Their father, now 94, retired as one of the USDA’s national directors.

So what does the family patriarch think about his “kids” purchasing the Keystone Inn?

“I’m hearing from his friends that all he does is brag about us,” Patrick said, with a smile.

The Keystone Inn is located at 231 Hanover St., Gettysburg, and online at keystoneinnpa.com. For more information on Inns of the Gettysburg Area, PABBI and AAAii, see gettysburgbedandbreakfast.com, painns.com and africanamericaninns.com/index.html, respectively.