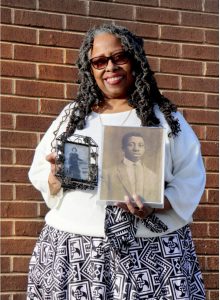 Barbara Barksdale with photos of her ancestors.

Something was up. Sharonn Williams, an experienced Black genealogist, just knew it.

She had typed into Ancestry.com the name of a distant connection born in Charlottesville, Va., and dozens of “hint leaves” popped up from other family trees. More frightened than curious, Williams turned off the computer.

“I had to push away,” said Williams, the great-granddaughter of Ephraim Slaughter, one of Harrisburg’s last surviving Civil War veterans. “I knew that meant white blood. I knew it had to be somebody important, or there would not have been that many leaves, and because it was Charlottesville, I thought, ‘This is not going to be good. I can’t deal with that tonight.’”

Genealogy has never been a breeze. Still, for white Americans, the truth about sepia-toned ancestors usually lurks in census records, ship’s logs and church archives. But Americans of African descent have few Mayflower moments for their unnamed, enslaved ancestors. Even after the Civil War, indifference or barriers to documenting the lives of African Americans created genealogy roadblocks.

Now, social media, digitization and DNA are restoring forgotten stories to the American experience, dispelling myths and illuminating the interconnectedness of Black and white in America.

Williams’ encounter with the chasm between white and Black genealogy, and its closure through the power of technology, happened that night she entered “Betsy Hemmings” into Ancestry. Naturally, you see what’s coming. Hemmings was born at Monticello, a cousin of Sally Hemings. Williams learned that Betsy, too, was an enslaved concubine, to Thomas Jefferson’s son-in-law, John Wayles Eppes, a prominent Virginia lawyer and politician who would go on to serve in the U.S. House and Senate.

Without that link to famous whites in history, few leaves would have appeared. Betsy Hemmings’ life would have been barely traceable.

Pre-internet, records didn’t come to genealogists. Genealogists went to the records. For Black genealogists, those records were less likely to be housed in archives.

Prominent genealogist Barbara Barksdale remembers chasing clues, driving around the country, pumping quarters into pay phones, hunkering in basements, and jumping over holes in the floor to put her hands on family records.

And while the digital age is minimizing the tactile joys of genealogy—“You don’t get to sneeze your ancestors out,” Barksdale said—it is also connecting researchers with previously inaccessible records.

Harrisburg historian Calobe Jackson, Jr., notes that the details of the 1950 U.S. Census will be released this April and quickly digitized for easy access. There, in the count reflecting the post-World War II migration of Black Americans from the South to the North, he hopes to find a few previously hidden ancestors—perhaps an elderly relative living with family.

“More people will see themselves in the Census than ever before,” Jackson said. “A lot of people are going to see their relatives in the north they never knew about.”

While transcription of handwritten records has saved countless historian eyes, digitization that makes them searchable has finally come to an invaluable trove for Black Americans—the records of the Freedmen’s Bureau. Documents from the federal agency, charged with helping the formerly enslaved adjust to life after the Civil War, were once scattered and confoundingly organized. When Ancestry.com made them available online in fall 2021, historians gained searchable access to records of rations issued, refugee camps operated and relocations facilitated. 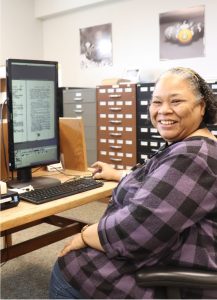 Lynette Palmer, a Dauphin County Library System information services assistant, presents genealogy webinars for institutions nationwide. One webinar attendee found a relative in a Freedmen’s Bureau labor contract—“the first place she ever found something in writing that gave validity to this person that her mother said her family had been telling her about,” Palmer said.

“It’s given people the opportunity to fill in some holes,” she said. “Digitizing is great, but digitizing still doesn’t make them searchable. You can browse if you have a million hours in a day.”

There are shocks to prepare for. Palmer once discovered an enslaved ancestor inventoried with a plantation owner’s livestock.

“To these people, my ancestors were the same as cows and horses and other property,” she said. “If you know history, you know it was real, but seeing actual real-life documents with a price on a person—for a lot of African Americans, it’s a hard pill to swallow.”

DNA and technology are revealing an unvarnished truth—a long history of shared blood between white and Black. Much of it began with rape by slaveholders and others in positions of power.

“People want to believe the Romeo and Juliet thing, that they were in love,” said Williams, founder of Kindred Spirits genealogy workshop. “Get over yourself. We know what it was.”

Barksdale, whose DNA traces to 13 world regions, only occasionally reaches out to white relations through Ancestry, hesitant to reveal that their greats were rapists or slaveholders. Of those she has contacted, one said his long-ago grandfather must have really loved Barksdale’s long-ago grandmother. Others don’t respond.

“It’s a big difference once the whites find out they have a lot of Blacks in their history,” said Barksdale.

Through a relative who wrote a family history, Palmer found a distant grandmother descended from a slaveholder’s son.

“The proof is on multiple levels,” she said. “Here are actual documents that exist from that time that clearly say this. Then there’s the DNA piece. DNA doesn’t lie. If you share DNA with somebody, then you’re related on some level.”

Difficult conversations might follow, said Williams, but the findings also create opportunities. Through digitization, descendants of slaveholders can share family records that could fill holes in Black family trees, such as plantation logs revealing names and places where enslaved ancestors were purchased.

“Genealogy is something that is very personal, but you can’t do it in a vacuum,” said Williams. “You have to depend on the generosity of others.”

People today infected with the “crippling mindset” of believing “Lost Cause” myths are unlikely to accept the true version of events, Williams said. That would mean relinquishing power and “admitting that they are just like everybody else.”

Still, the stories must be told for a picture more encompassing than the history taught in school, said Jackson.

“The true stories are starting to come out about what really happened in American history,” he said. “There are the horror parts of slavery, and the fact that slavery did exist. We’ve even found more Black Americans that owned slaves. It’s telling the whole story.”

Black genealogists continue fighting to archive existing records for all to find. Williams was among the experienced genealogists recruited for the meticulous process of transcribing the Freedmen’s Bureau records. Barksdale once caught materials tossed out a window to her.

“And they were so moldy and filthy,” she said. “But now, those records are in the Historical Society of Dauphin County, and Dickinson College transcribed them. If we did not salvage those records, they would not be online for everyone in the world to look at.”

Of course, some stories are just plain colorful. Williams discovered her great-grandfather William was married to Carrie Jackson, and William’s brother, Daniel, was married to Mary Jackson. Just a case of brothers marrying sisters, right?

It took years, but Carrie’s obituary on that searchable godsend to genealogy, Newspapers.com, finally confirmed a hunch—that Mary Jackson was Carrie’s mother.

“I was like, ‘That can’t be right,’” Williams said. “It was so crazy. So, the mother and the daughter were in-laws.”

Every morning, Barksdale prays that she has the best of all her ancestors “wrapped up inside of me.” She turns her genealogy work for clients into positive stories of the journeys into “nooks and crannies of the world that nobody has bothered to dust off.”

“It gives them peace of mind to know who they are,” she said. “We are part of our ancestors. It helps us think about what our next steps in life could be, and how we pull forward those who are around us. It doesn’t matter if they’re Black or white. How do we help everybody in that unit get ahead? Just because there were some bad things in our lives that we found out through DNA, how do we turn that back and make it into something better and more prosperous for all of us?”

Superheroes are popular because everyone likes origin stories, a guest once said on “Finding Your Roots with Henry Louis Gates, Jr.”

That knowledge, made increasingly possible for Americans of African descent, adds to the national dialogue about where the United States came from and where it’s going, “Finding Your Roots” executives told TheBurg in a phone interview. The popular PBS series is helping drive interest in personal genealogy and its cumulative power to reveal untold chapters in American history.

“For so long, African Americans were erased from the narrative,” said Lead Genealogist Kimberly N. Morgan. “We need to get their stories told, put them back into the narrative, and give them and their descendants as much of their agency as possible. Everybody wants to know where they come from. If we can answer that, especially for African American people in this country, it’s a really powerful gift.”

Since “Finding Your Roots” premiered in 2012, the availability of genealogical records online “has just exploded and continues to explode,” said Executive Producer Sabin Streeter. “Our sense of what’s possible, even at the professional level, has expanded, and certainly what’s possible for the person at home who wants to do their family genealogy, it seems like a tremendous shift.”

The average Black American has about 25% European heritage, said Morgan. Gather that DNA in databases, and the common threads of heritage become clear. Such findings and stories, when uncovered and shared, provide a launching pad for conversations about race.

This season’s “Finding Your Roots” session with actor and director Rebecca Hall, whose grandfather sometimes chose to pass as Native American or white, generated “a huge amount of chatter on social media,” said Morgan. The answers to many “whys” of history will never be known, but creating context helps build understanding.

“I love that our episodes and our work are facilitating some of these conversations,” Morgan said. “You need to find a foothold into history that catches your interest and opens that door to how you relate to them, and that relation allows you to start to empathize.”