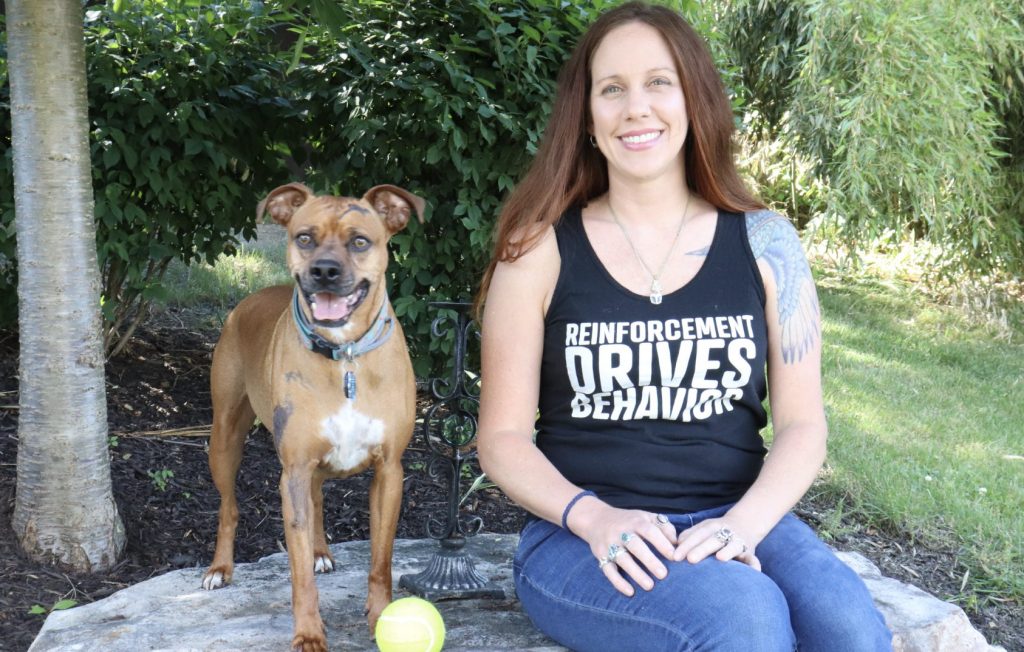 It started with a growl.

Norman was just a puppy when he began showing signs of “resource guarding”—the phrase that dog behavior experts use to describe dogs being possessive—and sometimes aggressive—over their food or toys.

“We couldn’t walk near his food bowl,” said Jessica Green of Millersburg. “The first time or two, I thought, ‘Oh, he’s just being a puppy.’ But then you could tell by the look in his eye, he was not playing.”

And Norman was growing by the minute. A Mastiff mix, he already weighed between 30 and 40 pounds at 10 weeks old.

“Our fear was—he was going to get a lot larger,” said Green, although admittedly, she has “a soft spot for large breeds.”

She went online to search for accredited dog trainers in the Harrisburg area, focusing on those affiliated with the International Association of Animal Behavior Consultants (IAABC). Her search turned up two options—only one of which offered the individualized training Norman needed.

“My only hope was Harrisburg’s Great Dog Program, and luckily they had space for me,” Green said.

For several months, Norman and his pet parents—Green and her fiancé—worked with trainer Natahnee Miller, president of Harrisburg’s Great Dog Program.

One of the first things Miller focused on wasn’t necessarily Norman’s behavior—but his parents’. Norman, like many pups, was adopted in 2020 amid pandemic shutdowns and work-from-home lifestyles.

“At the time, we weren’t the most structured people in the world. But Natahnee gave us ideas as to how to integrate structure into our lives because Norman needed that as a puppy,” Green said. “Now, we purposefully walk him in the morning and at lunchtime every day.”

Miller also taught them how to read Norman’s body language and behavior. And you could say that Norman has let his guard down. Now a big boy of 105 pounds, 2-year-old Norman no longer growls to protect his food, although he’s still working on a few other quirks.

“He’s not perfect, but he’s much better,” said Green. “The training made living with our dog that much more enjoyable. We will forever be thankful to Natahnee and Harrisburg’s Great Dog Program.”

The experience was life-changing in many ways. Green became so fascinated with dog behavior training that she now volunteers at an area shelter—the Perry County Animal Rescue—once a week.

Another way Green showed her appreciation was through donations to Harrisburg’s Great Dog Program. As a nonprofit, the all-volunteer organization is dedicated to providing high-quality training with no expectations of payment. Donations fund the organization’s relatively small budget of $5,000 annually, which covers everything from insurance to dog treats.

When Miller came on board in 2016, she brought a wealth of knowledge from her experience as a former state dog warden and the former director of behavioral care at the Harrisburg Humane Society.

“Working at the shelter, and as a dog warden, you see a lot of people having a lot of communication issues with their dogs—things that are fixable,” Miller said. And she wanted to help.

The most common issues?

“What dog owners typically label as ‘aggression’—things like barking at other dogs or people, cars and bikes,” said Miller. “Separation anxiety is also up there, a lot of behavioral issues.”

Miller realized that Harrisburg’s Great Dog Program could fill several voids in the community. Very few area trainers were using the modern, relationship-based training methods she believed in. Dog behavior, she said, usually boils down to two things—context and communication.

“They either haven’t learned a behavior, or they don’t know what you’re asking,” said Miller, whose day job is with the state’s Department of Environmental Protection.

Today, 10 years after its founding, Harrisburg’s Great Dog Program has helped hundreds of pet owners and their pooches, mostly in the Harrisburg area. But the circle widened during the pandemic. Many pet owners across the country—struggling with pandemic puppies and struggling financially—discovered and contacted Harrisburg’s Great Dog Program. The magic of Zoom allowed Miller’s free training to go nationwide.

“Natahnee’s mission at Harrisburg’s Great Dog Program makes sure cost isn’t a barrier to great dog training, and it keeps dogs in homes and out of shelters,” said Rhonda Renwick of Harrisburg. “It kind of hit my heart—I love the mission behind the program.”

“It’s very rewarding to see a dog live a happy life and break some of the barriers they had in a shelter and allow a dog to just be a dog,” Renwick said. “To break down fear, barriers with other dogs, with people, so you can have a happy wiggly dog, is so worth it.”

Look for the Signs

It’s a common scenario: You’re at an area park, when a dog—off-leash—runs up to you. “It’s OK—he’s friendly,” shouts the owner, usually from a distance. But does that pet parent really have their dog under reasonable control? What if you’re afraid of dogs? Do you have children or a dog with you? How is your dog going to react?

For all these reasons and more, two area nonprofits—Harrisburg’s Great Dog Program and Cumberland County’s Animal Assistance Program—are teaming up to place educational signs in area parks. So far, 10 parks in East Pennsboro Township are installing the signs, which explain why it’s best to ask permission before letting your dog approach others. A QR code links to free dog training and sociability materials on Harrisburg’s Great Dog Program’s website. Additional parks and rec contacts are being sought.

“Consent—just like with people—is the key,” said Natahnee Miller, president of Harrisburg’s Great Dog Program. “I don’t want someone I don’t know running up to me and giving me a hug—and most dogs don’t either.”