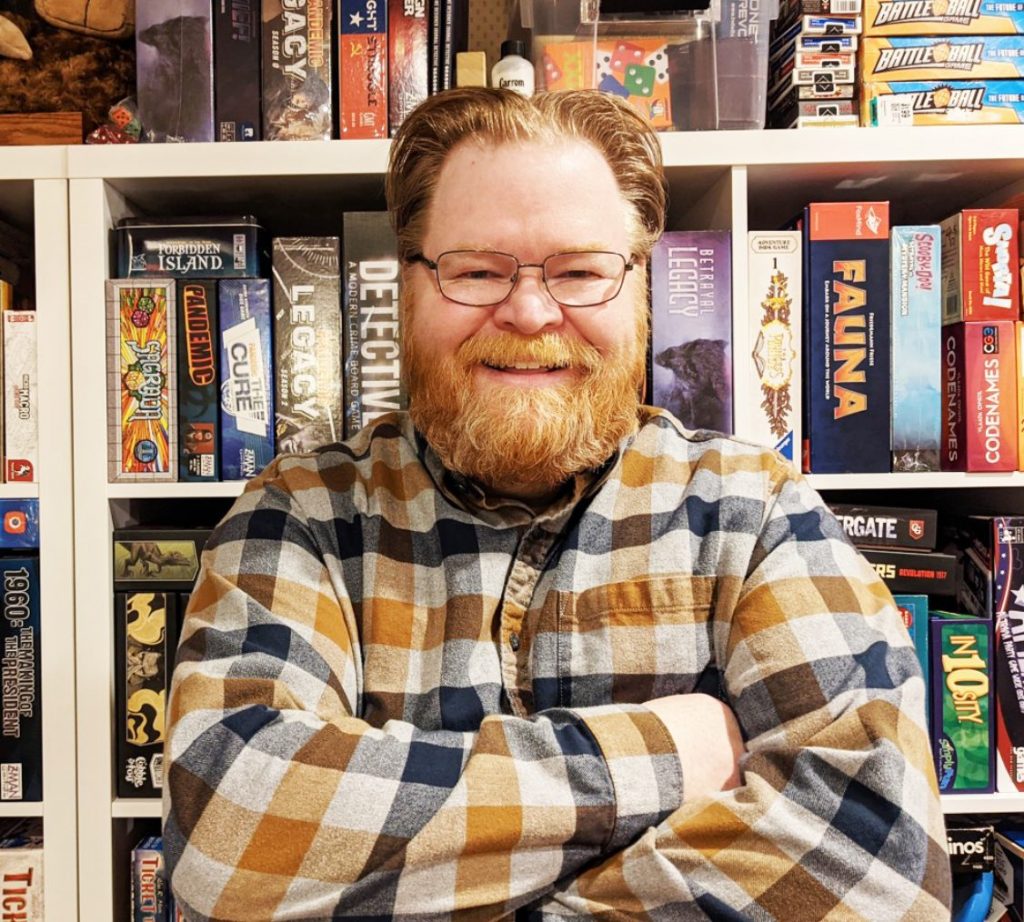 You may have read about his high-profile job as the past executive director of the state Office of Open Records. He’s now the new deputy treasurer for communications at the Pennsylvania Treasury, so his public service continues.

But there is a secondary, underlying and perhaps more compelling side to Erik Arneson—as an internationally recognized expert on tabletop games and card games. His book, “How to Host a Game Night,” came fresh off Simon & Schuster’s press a few months ago.

“Tabletop Gaming Expert” isn’t some role-playing alter ego or even Arneson’s lifelong ambition. He started off as a typical kid raised in south-central PA (Christiana), playing in Little League, competing in wrestling, and playing the typical games from the 1970s and ’80s: Connect 4, checkers, Risk, Pictionary and Trivial Pursuit.

“I didn’t know what other games were out there,” Arneson said. “We didn’t have a game shop where we lived. We bought our games at K-Mart, Toys ‘R’ Us and Jamesway.”

While in high school, Arneson created his own play-by-mail wrestling game. Players from across the country created pro wrestling characters, and he programmed his Apple IIc computer to put matches together and decide the winners.

“That hobby helped me pay for incidentals [throughout] college,” he said.

Then in 1999, with a combined collection of two to three dozen games, Arneson began writing about tabletop games for about.com. Like any generalist writer with the mission to clearly explain unfamiliar things, he dove in headfirst.

“And then I became hooked,” he said. “I certainly didn’t know what I was getting into when I applied.”

As he wrote about tabletop games for the next 15 years, Arneson grew his collection to over 1,000 games. He played them with friends and family over his favorite format of social, pleasant evenings at his dining room table with his wife and a few other couples. He cultivated his hobby by organizing gaming conventions and weekends for longer tournaments and playing more complex, elaborate games.

He didn’t know it then, but he was collecting ideas and anecdotes for a book to be written decades later.

“I had thought about writing a book for a while, but I had no clear idea about what it would be,” he said.

Eventually, an editor from Tiller Press (a division of Simon & Schuster) approached him after finding some of Arneson’s old articles about board games and card games on about.com, and they fleshed out the idea from there.

“I didn’t want to present a dry how-to,” Arneson said. “I turned the book into my love letter for game nights—how much I enjoy them, how I enjoy sharing games with other people. Such a simple idea that hadn’t been done before.”

“How to Host a Game Night” isn’t just an etiquette book of advice for someone hoping to plan the perfect gaming event. Through it, readers can see the story arc of how technology actively evolved tabletop games, from pre-printing press to today.

“Games reflect where we are as a society, like my parents playing bridge with their friends back in the ’70s,” Arneson said. “Games are a conduit for building community and enjoying each other’s company on a personal level.”

Technology boomed the tabletop gaming industry exponentially, moving from having a limited infrastructure for publishing (i.e. Hasbro, Parker Brothers and Milton Bradley) to having thousands of new board games published every year. The internet has made it possible for game creators to lucratively distribute board games via small press runs.

One exciting evolution is changing the traditional competitive paradigm of “I win/you lose.” Some newer games break that mold, requiring the players to collaborate to win. (If you’re the ultra-competitive type, think of it as “we win/game loses.”)

As an internationally accredited tabletop games expert, we might think Arneson is “the guy to beat.” He assures us he’s not.

“When you play a variety of games, you don’t become an expert on any one,” he said. “For example, I know the rules of chess, and I respect it, but I’ll never devote the hours it takes to be one of the greats or one of the pretty-decents.”

Instead, he prides himself on being the one to explain and teach the game and for keeping the atmosphere relaxed and welcoming, with lots of laughter.

The guy to beat?

“I have some great memories playing Trivial Pursuit,” Arneson said. “It was dad vs. everyone else, and dad would always win.”

Playing games imparts many dad-type lessons. Collaborate within a group. Don’t let egos drive decisions. Don’t fear unusual approaches to problem-solving. Train your brain to look at things from different perspectives. Enjoy the game for the experience itself. Be a good sport. Lose (and win) graciously. Hang out with your friends. And some modern dad advice—put your phone away.

Despite his credentials, Arneson considers himself a hobbyist.

“Back then, I wasn’t the most qualified person to write about board games,” he said. “There are plenty of people who work full-time at board games who know more than I do.”

For the future, Arneson predicts a modern resurgence in tabletop games.

“As we emerge from the pandemic, I think there’s a hunger from people to get back to in-person gatherings with friends,” he said. “I think society needs to get back to that.”

“How to Host a Game Night: What to Serve, Who to Invite, How to Play—Strategies for the Perfect Game Night,” by Erik Arneson, is available from online booksellers.