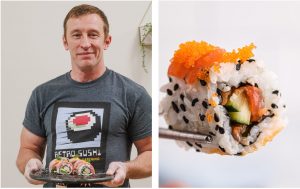 Sushi has become an obsession for Nate Baer—and he’s not alone.

“About 20 years ago, there was probably one sushi restaurant in the entire Mechanicsburg area,” Baer said. “But the area has shown an interest in cultural food,” leading to a long list of current Harrisburg-area hot spots for sushi.

Baer was ahead of the curve, finding his passion for the traditional Japanese food and art form when he was young.

“I’ve always been a super big fan of sushi and Japanese culture,” said Baer, 42, of Mechanicsburg. “I was like a nerd as a kid, into video games and anime, and my dad introduced me to sushi. So I kinda stood out as a kid.”

Sushi, a colorful mix of vinegared rice, vegetables and seafood—often raw—focuses both on flavor and presentation. That’s because the ingredients are sliced with precision and artfully rolled into tight circles that, when cut into bite-size pieces, reveal pops of color combinations inside—pink salmon, green avocado and white rice, wrapped in thin black sheets of seaweed known as nori.

Baer loved sushi so much that he taught himself how to make it.

“I’m big into eating healthy, and sushi, in my opinion, is one of the healthier things you can eat,” he said. “I’m really into the presentation and design of it.”

The advent of YouTube videos helped him hone his craft. A few years ago, he started making it at home for his family every Wednesday night. When he began taking pictures and posting them on social media, friends took notice—and one friend in particular hit upon a great idea: What if Baer offered sushi-making classes?

The idea for Retro Sushi, Baer’s side business, was born. Why “Retro?”

“Because I’m a super big nerd, and I really like old school video games. I just like the graphic style of pixel art, so I blended the two things I like, together, [into the name Retro Sushi],” said Baer. “I think there’s something going on in mainstream pop culture right now—there’s a lot of retro going on, a return to the ‘80s.”

This is the third year of business for Retro Sushi, and Baer has worked up to steady gigs of 60 or 70 sushi-making classes annually. It’s a mix of in-home classes, corporate team-building events, and sessions regularly offered at area businesses—The Vineyard and Brewery at Hershey and Ann’s Cupcakery in Mechanicsburg, where I recently honed both my sushi skills as well as my swirls of cupcake décor.

Why sushi and cupcakes together? You could say it’s a match made in heaven: Ann’s Cupcakery is owned by Baer’s wife Nicole, and the couple offers combo classes regularly.

Eight of us gathered on a recent weeknight, and both Baers provided all the ingredients and supplies needed. Sushi came first.

Our sheets of seaweed went shiny side down on our bamboo mats. Then we learned how to layer it with pre-cooked rice, long strips of cucumber and imitation crab. The true test came next—rolling it all up, lifting the bamboo at just the right times, sealing it all together. My first attempt didn’t quite work out.

But Baer showed me where I went wrong, and my second attempt resulted in a successful, although slightly wobbly, maki roll.

We turned things “inside out” for our second roll of the night. That’s what “uramaki” means, as the rice is on the outside of the roll, layered with nori, carefully arranged salmon and avocado. We even got fancy by sprinkling and patting sesame seeds onto the rice-encased rolls.

Slicing up the sushi and placing everything in our to-go boxes gave the class a sense of accomplishment.

“It’s a fun, simple introductory class for people with no real skills. You can just go in and do it, and have fun,” said Matthew Edwards of Camp Hill.

“Especially with this past year, it was good to get out and learn something new,” said Brian Brockman of Carlisle. “Rolling sushi was something I wanted to learn how to do.”

Seeing that look of surprise and satisfaction on class participants’ faces, that look of “I made that!” is what it’s all about for Baer.

So what’s the secret to good sushi?

“The rice, for sure,” Baer said. “The fish is important, but if you don’t make the rice right….” Well, we won’t finish that sentence and go there.

Baer advised the class to use small to medium grain rice, rinsed before it’s cooked to remove starch. He personally uses an Instant Pot to prepare it just right. After the rice is cooked, Baer recommends letting it soak in cold water, then adding sushi rice vinegar.

“I traveled for two weeks with friends, and we did a lot of sushi eating,” Baer said. “It was definitely inspirational.”

With his full-time job as a bartender, sushi-making on the side, and his wife’s cupcake business, it sounds like an interesting recipe for success.

“We’re not eating sushi and cupcakes at home all the time—especially not the cupcakes,” Baer said with a laugh. “We do laugh about the idea that it’s odd that we’ve never taken a class for these skills, and we definitely are really fortunate that we have found things we’re passionate about.”