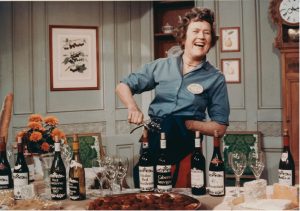 The rubric for a documentary is so vastly different from that of a fictional narrative story that it’s almost difficult to give a definitive review.

For fictional narratives, you can judge the film’s merit based on story, acting, mise en scene, the general direction of each scene, etc. But for most documentaries, their merit is measured mainly with the accuracy of which the information of the given topic is laid out—whether there’s bias, whether there’s a wide enough exploration of the topic, etc.

“Julia” is one such documentary. Directors Julie Cohen and Betsy West (the dynamic directorial duo who brought us “RBG” and “My Name Is Pauli Murray”) bring the story of Julia Child, the pioneer of cooking shows, to life on the big screen, detailing her history and the pivotal moments of her success story. Not only is the subject a vibrant, beloved figure in the eyes of the American public, but the choices made for this film share that vibrancy.

Julia Child stumbled into her television career when she was in her 50s, with the promotion of the book that she co-wrote with Simone “Simca” Beck and Louisette Bertholle (who is strangely not mentioned in the documentary), “Mastering The Art of French Cooking.” She requested that a hot plate be provided for the TV spot and made a “proper omelette with a proper omelette pan” right there in the studio, something which threw both the studio and audiences for a loop. In a world where American housewives had grown tired of cooking, complete with jello salads and an abundance of recipes involving spam, Julia Child’s approach to the kitchen created a spark that set the entire country on fire.

Any televised cooking show can thank Julia for bringing back the joy of a home-cooked meal. Not only did she remove the fear of cooking by giving in-depth, step-by-step directions, her outgoing personality made it fun and engaging (an evocative example of this is in the first seconds of the documentary, where Child presents the “chicken sisters,” cheerfully brandishing a butcher’s knife as she introduces a row of roast chickens by name).

So, how did Cohen and West take an already dynamic story and make it stand even further apart from most run-of-the-mill documentaries? Two ways.

As Julia says early on, “I find that if people aren’t interested in food, I’m not very much interested in them.” And for a modern audience, looking at old footage of a cooking show with its grainy, standard-definition clarity isn’t going to cut it.

So, the first tactic that the documentary uses is to layer in unadulterated, visceral, mouth-watering dramatizations of food preparation amongst the VHS-quality footage of Julia Child making meals. These shots will turn you into a foodie if you aren’t already. The food is beautifully presented, far better than any other food documentary in recent years—of which there have been countless, but they always seem to focus on getting the audience to fall in love with the subject. In “Julia,” that goal is not external. Instead, Cohen and West set out to give the audience a glimpse through Julia’s eyes, in hopes that they fall in love with the food that she’s fallen in love with.

The second way that “Julia” stands out is in its use of journal entries and correspondence, mainly concerning Julia’s husband, Paul Child. We learn about their first impressions of each other from these scrawled passages, their continued impressions as their relationship builds, culminating in their marriage, and then their love notes and admissions of adoration continue throughout the film. There are many side characters that the film introduces to fully develop the story of Julia Child, but Paul is the most prominent supporting character.

“Julia” is informative, evocative, inspiring and nostalgic in all the best ways. For a unique hour and a half of documentarian escape, make sure you don’t miss this one. “Julia” will play at Midtown Cinema this November.

Down in Front! Presents

3rd in the Burg