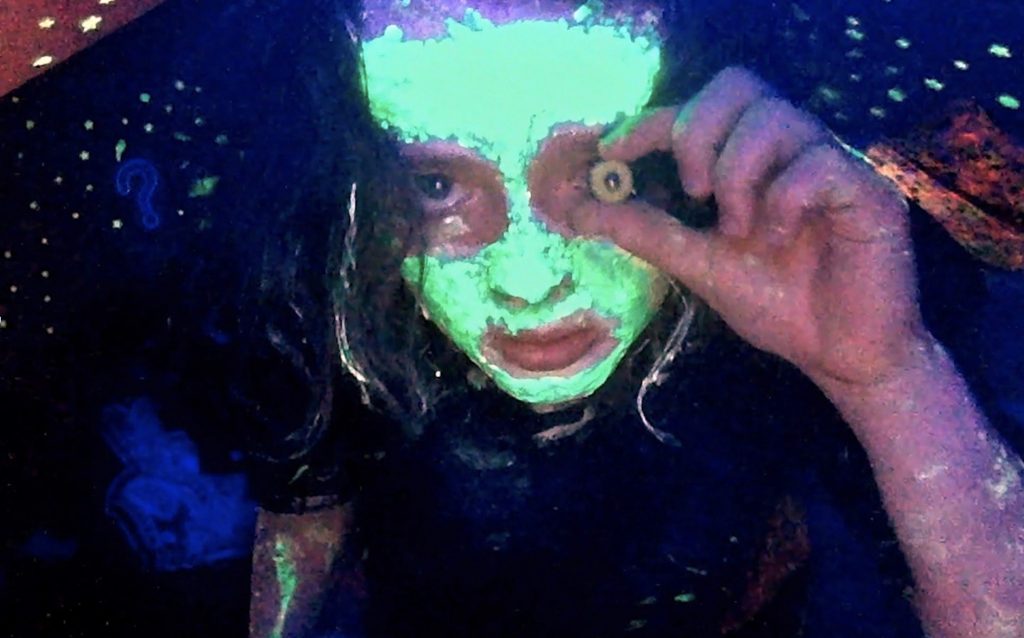 Jane Schoenbrun’s “We’re All Going To The World’s Fair” showcases the online community of horror fans—but that doesn’t mean it is a horror film by most definitions.

The film follows Casey (Anna Cobb), a teenage girl with a grunge aesthetic and a lonely perspective. In the opening scene, Casey immediately draws us into her headspace by spending eight solid minutes on a webcam, initiating herself into an online role-playing horror game called “The World’s Fair.” This extended static shot immediately clues us in to the ride we’re about to take—found-footage inspired cinematography and a drawn-out but powerful character study of a girl who desperately wants to be seen.

As Casey pricks her finger with a pin and recites the words, “I want to go to the World’s Fair,” over and over, her intentions—and her nerves—are perfectly clear. The game touts that the initiation will change you, slowly but in horrific ways—and Casey covers her excitement and uncertainty with a thick layer of cool, announcing her love of horror and claiming her readiness to see where the game leads.

And that is, in a nutshell, the premise of the story. Casey wants to be affected by the game, and so she is affected by the game. She watches clips of other role-players acting out the ways that they transformed (one girl claims she is slowly turning into plastic, and a young man describes how he believes there is a Tetris game being played in his body, and it has almost reached his neck), and begins to record herself in various scenarios, trying to document her transformation. Sometimes, she wakes up in the middle of the night and smiles creepily at the camera before falling back asleep; sometimes she dances happily to music before suddenly screaming in terror, etc.

Truthfully, the film would have hit all the right notes had it been promoted as a drama rather than a horror film. As far as creep factor goes, the progression of the story will leave most horror fans severely wanting and is much more fascinating as a case study of the theatrics we put into being someone, getting noticed, and having a purpose, to whatever extent we can get.

The film does an expert job of showing Casey’s feeling of social isolation and a drive to placate that loneliness through the internet. The tone of the film is heavily inspired by Creepypasta, an online horror storytelling platform, though the horror elements never progress past adolescent—the vibe is more akin to a teenager telling a ghost story while sneaking glances at their friends to gauge how scared they are—and maybe that’s the point, because that’s all that Casey, as an adolescent, is capable of. Because she wants to be a part of this community that is so seemingly affected, she does her best to draw out the creepiness in all of her online videos.

The true horror of the film (and by horror, I really mean a stark discomfort in the direction the action goes) is found in the relationship she strikes up with a member of the horror community, who hides behind an identity of JLB (played by Michael J Rogers). JLB, a middle-aged man who appears to be very well off and very lonely, exhibits some blatant examples of grooming behavior that will put any audience on edge. While it teeters on the edge of inappropriate, there are never any moments where the vehicle takes the plunge into adrenal fulfillment (again, another reason not to strictly call it a horror film), but the discomfort is still there, and still deserves recognition.

Schoenbrun has created a captivating, if slightly misnomered film that, regardless of genre, will draw you in and make you care about its protagonist. “We’re All Going To The World’s Fair” will play at Midtown Cinema in April.

“Who We Are: A Chronicle of Racism in America”
New documentary with discussion panel
Sunday, April 3, 6 p.m.