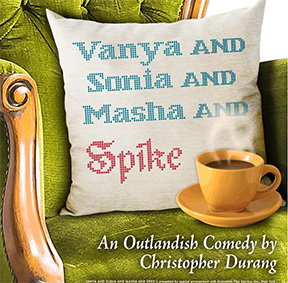 Theatre Harrisburg’s season capstone production from Director Matt Spencer, “Vanya and Sonia and Masha and Spike,” is a peek through the keyhole on the family dynamics of three middle-aged, discontented siblings who take jabs at each other while they air their grievances about how stuck they feel in their lives.

Playwright Christopher Durang pulls his inspiration for his drawing room comedy from Russian playwright Anton Chekhov, although Durang’s six-time Tony-nominated spin rings as more amusing and less despairing than any writing ever transmitted from Russia. Ever.

Set in the Hardwicke family’s Bucks County living room, decorated as light blue as the play’s mood and the blue herons chirping overhead, the thrust stage extends all the way to the audience’s feet, inviting us to eavesdrop on the family’s very personal moments as if we’re in the next room. (Ushers invite you to enter the theater through the set’s front door, if you like.)

We meet Sonia (Beth McIntosh) and Vanya (Darren Riddle), a restless sister and brother pair stuck in a steady routine of sniping at each other over petty matters. Sonia and Vanya have no life purpose and feel too old to generate any new patterns or prospects.

Lurking under a shallow surface is a source of their true resentment: they served as their parents’ caregivers for 15 years while their sister Masha (Diane Bateman) became a famous movie star. Bateman lays it on thick to bring the pretentious, insecure and mostly insufferable Masha to life, successfully creating a frail woman we love to hate.

When Masha visits, she brings her room-filling ego, her much younger love interest, Spike (Ryan Dean Schoening), and her plan to tout her family to a costume party as her entourage. Masha brings five extra people as “accessories” to her Snow White costume. Miss Manners would blush at this breach of etiquette, yet it highlights the conceit in Masha’s character.

McIntosh plays the childish, self-pitying, passive-aggressive Sonia while incorporating a believable undertone of sarcasm. Despite Sonia’s flaws, it’s still hard not to root for her as the underdog when she one-ups her sister at the costume party and, later, when Sonia finally takes a baby step toward having her own life.

With his more subdued approach to his character, Riddle nails a pinnacle moment in the play: Vanya’s meta play-within-a-play monologue about growing up in the 1950s. He eloquently romanticizes how things used to be back when everyone shared the same memories as a national consciousness. Not only is Riddle’s recitation a time capsule opening across the cobblestones of memory lane, but it reveals his character’s resistance to evolve and his disdain for impertinent young people like Spike.

Schoening brings a smarmy, cocky swagger to Spike, a superficial, oversexed character who temporarily has a roaming eye toward the neighbor girl Nina (Aleax Olivera). Although the storyline doesn’t flesh Nina out much, either, Olivera portrays her with a sweet, energetic naiveté.

On the fringe of the Hardwicke family is their cleaning lady, Cassandra (Gerren Wagner), who comes in even on her days off to bring her over-the-top comedy skills to her overbearing character, a Greek psychic who practices voodoo for the greater good. This family needs her comic relief as much as they need her weird interjections and her big heart.

Much like any family reunion, of Russian descent or not, this play is poignantly funny and uncomfortably awkward in spots, yet strangely cohesive when we add blended and extended family. Overall, it’s a fitting denouement to Theatre Harrisburg’s post-COVID comeback season.

“Vanya and Sonia and Masha and Spike” runs through June 19 at the Krevsky Center, 513 Hurlock St., Harrisburg. For more information on show times and tickets, visit www.theatreharrisburg.com/2021-2022-shows/vanya-sonia-masha-spike/.