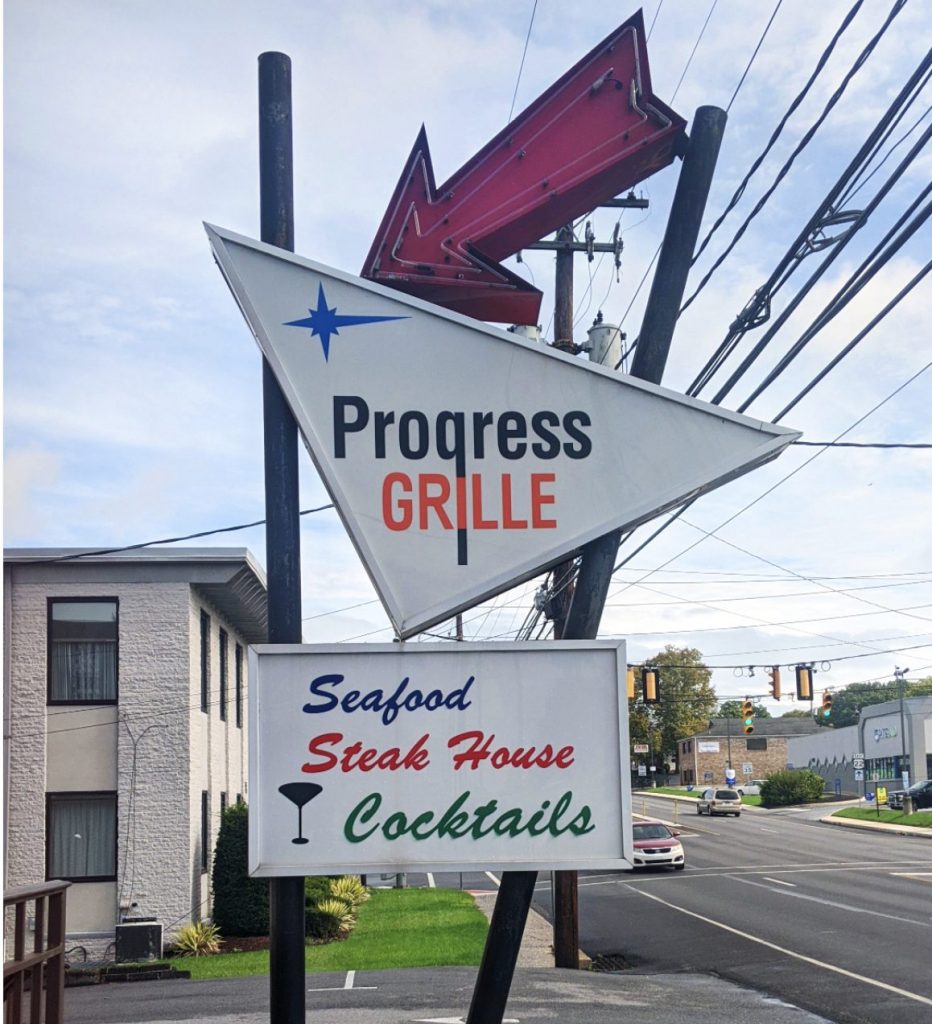 You could say that the Progress Grill has embraced the retro trend inadvertently—simply by staying the same as time passed by.

Upon entering, customers encounter carpeting, mirrored dining rooms, colonial light fixtures and a décor heavy on mauve. And I’d be remiss not to mention the sign. For people like me who enjoy following organizations like the Society for Commercial Archeology, the exterior signage is right out of the Atomic Age and a cool reminder of a bygone era.

But it’s really not the décor that attracts a loyal following of regular patrons. Rather, it’s the consistent quality of food, which customers have relied on for decades.

The Progress Grill dates back to 1946. The men behind the restaurant today, Nick and John Karagiannis, purchased the place in 1981.

The brothers didn’t set out to become restaurateurs. John said that he came to the United States to pursue chemical engineering. Working in restaurants caused him to rethink his plan and strike out on his own.

“I bought this place when I was 24½ years old, and I told my brother, Nick, who was studying in Italy to become a doctor,” he said. “So, he quit college to come over here.”

When the brothers purchased the Progress Grill, they kept the name, but changed the menu.

“It included items like pizza, sandwiches and a few dinners,” John said.

The two had experience working in restaurants in Maryland and downtown Harrisburg. So, they were familiar with the industry, but perhaps not the pace.

“Downtown restaurants didn’t get much business at nighttime,” John said of those bygone days.

It didn’t take long, however, for the two to hit their stride, and soon they began expanding the menu. The changes were well received. This buoyed their confidence, and they began tackling the task of expanding the physical space.

“After two years, we bought the property next door and put in a new dining room and a new kitchen,” John said.

By 1994, the brothers were ready to add yet another dining room and double the kitchen size.

John credits his Maryland restaurant experience for making crab cakes that fly out the door.

“We brought that recipe here and changed it a bit,” he said, adding that they use top-quality crabmeat and very little filler. For their slow-roasted prime rib, their first priority is to seek the best quality.

“Then I check the price,” John said.

The brothers credit their loyal clientele and their focus on consistency for where they are today.

If there’s anything that has changed over the years, it’s the cocktails. John said that the menu used to be heavy on old-school drinks like vodka martinis and Manhattans, but now people want more creative options.

“Fancy martinis are taking over,” he said, with a chuckle.

The COVID-19 pandemic has been one of the greatest challenges over the long history of the Progress Grill. It forced the brothers to close for several months. After the restaurant reopened, the customers returned, but the employees didn’t, a common refrain in the industry.

Therefore, the brothers today spend quite a bit of time in the kitchen. And, no surprise—the supply chain has posed another big challenge.

Ed and Malane Digon live a few miles from the establishment and have been patronizing it for years.

“We like sharing the mixed seafood platter, and we’re also fond of their filet and lobster tail, their shrimp cocktail, their cream soups and their desserts,” said Malane, adding that the couple celebrated their 60th anniversary there. “We’re always treated well.”

Dale Kaplan is another regular. He and his wife Ellen patronize the Progress Grill every week, on the same day.

“I call it Thursdays with Nick,” he said.

The Susquehanna Township resident said that the food is always consistent, the fish is always fresh, and the lamb chops are amazing.  He also complimented the “excellent” customer service.

John said that the secret to running a beloved establishment for so long is to first love what you do, then take care of the customer.

“We offer quality food at a reasonable price, with good customer service,” he said. “If you have a recipe for success, you don’t change it.”