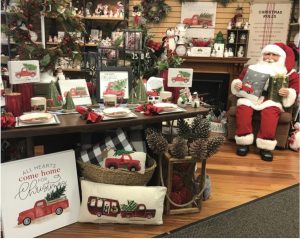 Products for sale at Rhoads

So says Dave Lutz, long-time proprietor of Rhoads Hallmark & Gift Shop in Hummelstown, who owns the business with wife Jeanne.

“We have a Hallmark Gold Crown shop, a gift shop, a women’s fashion boutique, a kitchen shop and a candle shop,” he said, explaining further.

Lutz bought the business in 1973, which many in the Dauphin County borough consider a local landmark. In total, Rhoads comprises 16,000 square feet of mercantile cornucopia on two floors and a cozy customer lounge.

Rebecca Yearick of Mechanicsburg recalled that she once shopped around “for the longest time” to buy an “old-fashioned” ice bucket for a party but just couldn’t find it. Then she spotted it, of course, at Rhoads—and it even came in brass.

You may say that Rhoads specializes in “old school” products, things once widely available in local shops but that have become increasingly difficult to find.

In the women’s boutique, Rhoads sells jewelry, scarves and hats of recycled materials through an exclusive deal with Brighton Jewelry, among many other items.

“They have women’s clothing brands not found in other department stores and at affordable prices,” Yearick said.

For Meghan Carpenter of Hershey, Rhoads is a family affair.

She grew up perusing Rhoads merchandise while accompanying her mother and late grandmother on shopping trips. Today, she and mother Jill still are Rhoads regulars, particularly for the store’s Hallmark Keepsake Ornament series.

“They have such a unique selection (at Rhoads),” Meghan said. “I love going there especially to buy baby gifts that you won’t find anywhere else, like their prayer animals and mother-and-baby figurines.”

And then there’s the small-town feel that Meghan said that she senses whenever she visits.

The credit for that welcoming atmosphere goes, in part, to Rhoads’ roster of 16 employees, many who have been there for 25 years or more.

“Everyone who works there is so friendly,” she said. “They’re all so willing to take the time to recommend things that you’re looking for.”

Rhoads’ roots in the Hummelstown community trace back to 1931 when Wesley Sanford established his drugstore there. In 1953, Simon Rhoads purchased the business and renamed it Rhoads Pharmacy. He later redesigned the building’s storefront, remodeled the pharmacy and added a gift shop.

In 1973, Rhoads sold the business to a young couple, Dave and Jeanne Lutz.

Dave had worked as a pharmacist under Rhoads before purchasing the business outright. Since then, they’ve remodeled the store five times, expanding it by purchasing adjoining properties on both sides.

In 2018, Dave Lutz sold the pharmacy operations to CVS, as the corporate chain opened a Hummelstown store blocks away on East Main Street.

“(CVS) came to me,” Lutz noted, after which he retired as a pharmacist.

After the sale, the business name was changed to Rhoads Hallmark and Gift Shop. Today, Dave continues overseeing the overall store while Jeanne supervises merchandise purchases by the store’s department heads.

For years, the Lutzes attended six national trade shows each year to scout for the store’s one-of-kind merchandise, traveling regularly to events in Atlanta, New York and Philadelphia.

Then came the pandemic. In 2020, all trade shows were cancelled. Dave Lutz has only gone to one show so far in 2021, the only one to reopen, he stated. In the interim, most merchandise is purchased through online vendors.

Meanwhile, the store was forced to close for eight weeks from March to May 2020 due to Gov. Tom Wolf’s pandemic orders. However, Dave Lutz said that business has since recovered.

“Sometimes, it’s been even better,” he said. “Forty percent of our annual revenue comes through the last three months of the year.”

As the business heads towards 50 years under his ownership, Lutz is proud of what they’ve accomplished.

“It’s all rewarding,” he said. “We’ve established one of the most popular shops in central Pennsylvania.”