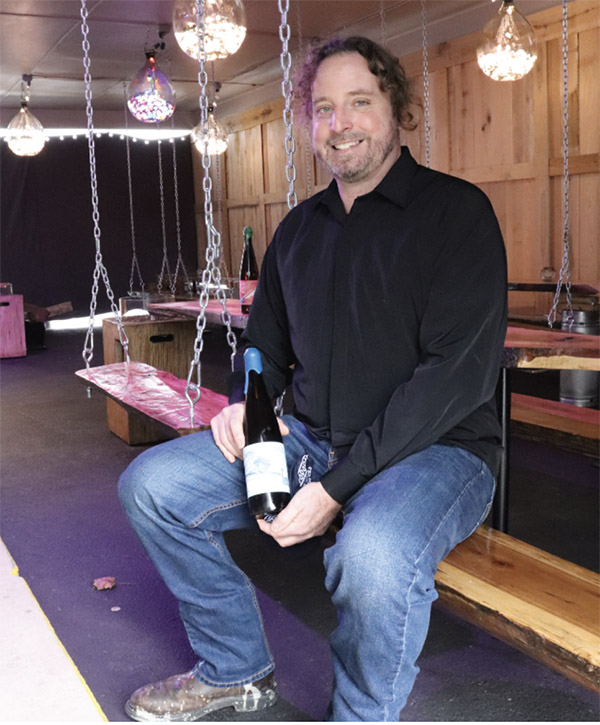 Johnny Compton’s new venture is sure to raise a few eyebrows. The Liverpool resident recently opened a bar, restaurant and taproom that’s as funky as the beers he brews.

The Highway Manor Brewing Co., located in Lower Allen Township, is anything but run-of-the-mill. Customers who patronize the place for the first time generally register amusement at the long benches attached by chains to the ceiling of the outside seating area.

Some have speculated about the safety of the swings after quaffing a few, but Compton, never one to take life too seriously, seems amused by the comments and may even be looking forward to the stories that ensue. Also hanging from the ceiling are 1970s-era terrariums, stuffed with strings of lights, which illuminate the cozy space after dusk.

If it happens to be a bright, sunshiny day, one’s eyes may have to adjust a bit to take in what is reminiscent of a Halloween fun house inside the bar. Black walls festooned with hand-drawn characters like walking grapes, strawberries, cherries and other bizarre graphics may cause some of a certain vintage to reminisce about the old days when psychedelia was the rage.

For Compton, it’s just his way of taking the road less traveled.

Compton’s no stranger to brewing, with about 19 years of experience under his belt. About five years ago, he began thinking about doing something a little different at his Georgian revival home in Liverpool that he calls “Highway Manor.”

His travels took him to New York and Philadelphia, and, as he was visiting friends and seeking opinions, he was encouraged to take a deep dive into sours. Tom Peters at Monk’s Café in Philadelphia even sent him home with a few.

“That was a game changer,” he said. “I used to drink a ton of IPAs, but now I don’t like them that much.”

Compton began selling his sour and wild farmhouse beers in Philadelphia, New York, Maryland and Vermont, using yeast cultures from Liverpool. Things were going well until the sour beer trend began gaining momentum and shelf space became too competitive. Then COVID reared his ugly head, giving him some downtime to work on his taproom project.

“It’s been in the works for a while to open a retail space, and I finally had the time I needed to get it underway,” he said.

Those who are unfamiliar with sours may be surprised to hear that they’re the oldest style of beer.

According to Craig Alperowitz, owner of Bolide Communications, a marketing agency that services sour beer producers, the style is as complex as it is delicious.

“The acidity levels make it refreshing, unique and totally different than what most consumers expect out of a beer,” he said.

As a brewer, Compton appreciates the challenges that sours provide.

“There’s a lot of magic that needs to happen outside the realm of control, which is why we charge more for a beer at times because, sometimes when they go bad, you have to dump them,” he said.

“Wild yeasts are often used in the production of sour, lambic or gueuze beers, and they’re wild for a reason,” he said. “They can be largely unpredictable and hard to control, which is why it’s so challenging to produce a really well-balanced sour beer.”

Compton’s current lineup can be viewed on the website, but many are self-explanatory, such as Mr. Cherry, Mr. Kiwi, Mr. Blackberry, Mr. Apricot and so forth.

“We source our stone fruit from Adams County, our strawberries come from Florida, our blueberries from Jersey, and we use a tart and interesting cherry from Venezuela,” he said, adding that he brews 24 total brands, 18 of which are available now.

It’s also important to Compton to offer a little something for everyone. So, he also sells what he calls “guest drafts,” which include a double IPA, a pale ale, a dark beer line and a pilsner.

Wines from Mazza Vineyards and Presque Isle Cellars hail from Erie and are also on the menu, along with cocktails like mules and margaritas crafted with PA spirits.

Travis Daniel has been a regular since the opening of Highway Manor and said that the smoked sour root beer is one of his favorites.

“The food is also excellent and priced reasonably, and I keep going back because I want to try all of their great beers,” said the Hummelstown resident, adding that the people are very friendly.

“The brewers and bartenders are knowledgeable and helpful,” he said.

Among his favorites are “Mr. Pear” and a farmhouse ale called “Hong Kong SayJohn.”

“It has lemongrass and ginger in it, and it’s really good,” Lewis said.

“I read in an article recently that most people stick with it due to how much fun it is,” he said.

Compton also treasures the many people he’s met along the way.

“What can I say? Beer people are great,” he said.