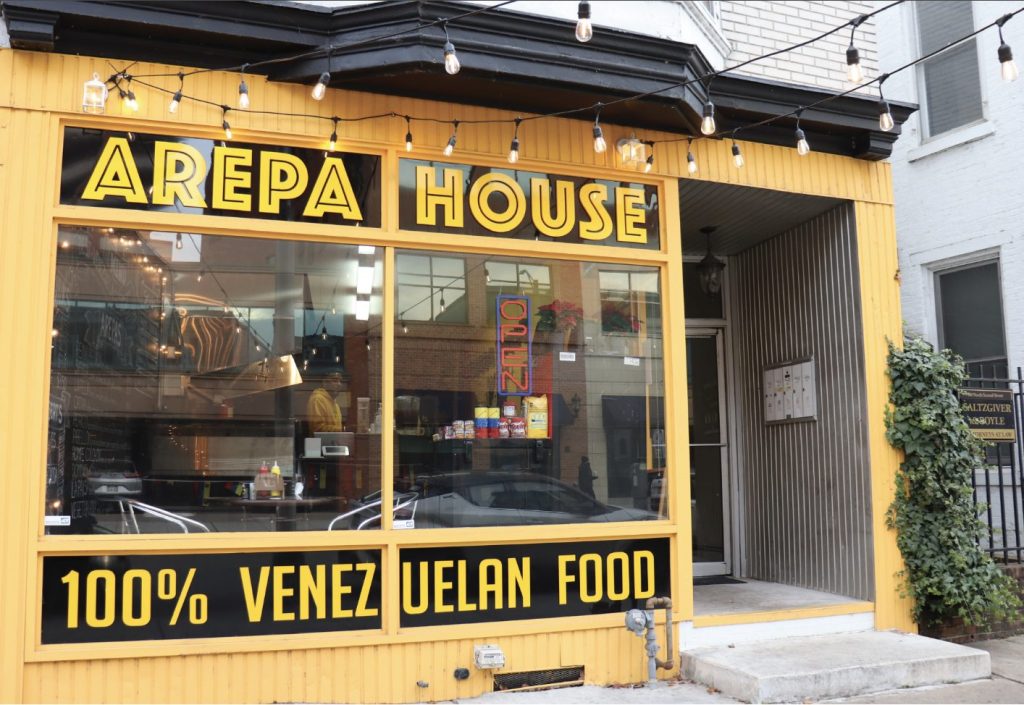 It’s safe to say that Arepa House, the new Venezuelan spot in downtown Harrisburg, is a family affair.

Leandro Fabian Curvelo started the restaurant alongside his mother, Rafymar Curvelo Gonzalez, who originally hails from Venezuela, and father, Leonardo Fabian Mejias, who is from the Dominican Republic.

“My dad was driving around the area and noticed Venezuelan food was missing,” he said.

Thus, the inspiration for Arepa House was born.

When customers enter Arepa House, they find themselves enveloped by the fragrant aromas of long-simmering meats and a faint sweetness in the air.

The menu is written out in artistic lettering on a floor-to-ceiling blackboard, juxtaposed with the storefront’s windows, where, on a nice day, sunlight streams in to brighten the already welcoming space. The walls are painted throughout in a warm, saffron color and are decorated with vibrant photographs of Venezuela’s beautiful landscape and natural treasures.

It’s the kind of space that’s easy to feel at home in, whether you dine in or take out.

“Here, everyone is welcome,” Curvelo said, smiling. “We are here with our arms open.”

For those unfamiliar, arepas are made from a dough composed of ground corn and water, formed into a patty-like shape and then baked, boiled or fried. Though sometimes eaten warm, with a simple smear of butter, most often arepas are slit open width-wise in order to play host to a variety of fillings.

“The thing I love about the pabellón is that you get so much flavor in one bite,” Curvelo said. “That’s the thing about Venezuelan food. So much of it comes from sweet and salty pairings. With the pabellón, it’s a whole adventure, really.”

I also tried la paisa arepa, which included beef, pork, chicken, beans and avocado. For the many meat lovers among us, it is a menu offering not to be missed.

With both the pabellón and la paisa, the arepa itself created the perfect accompaniment, providing a mild, tender, savory element juxtaposed against the richer flavor profiles of the meat and assorted fillings.

Arepa House also offers a number of appetizers and snacks, including cachapas, which are fresh corn cakes, empanadas and pepitos. At Curvelo’s recommendation, I tried the tequeños, which are like gourmet cheese sticks—crispy, savory and deliciously gooey.

“I used to eat tequeños for breakfast before school, when I was in Venezuela,” Curvelo said.

Arepa House offers two types—cheese, and cheese with guava syrup. I tried the latter. The melted cheese within played beautifully against the guava syrup, complete with a crispy, pastry exterior. The sweet and savory combination offered a delicious and filling example of the characteristic Venuzeulan food profile that Curvelo described.

Diners also have a selection of drinks to choose from, including guarapo, a sugarcane-based beverage, and chicha, which is corn-based and slightly resembles cider in its flavor profile.

Among several Venezuelan candy and dessert items, Arepa House offers the iconic tres leches, and crowd favorite, churros. I tried an order of the tres leches and had to fight my 7-year-old for more than a bite. Served chilled, the tres leches was silky in texture, with a subtle sweetness that proved just the right contrast to the richness of the arepas.

While sampling Arepa House’s offerings, I caught Peter Leonard, owner of Little Amps Coffee Roasters, also enjoying a quick bite. He has tried several of the arepas thus far, but he, too, considers the pabellón a go-to.

“We’re excited to welcome another small business to the block,” he said, smiling broadly. ”I’ve already been here twice, and it’s delicious.”