Back in the ‘60s, way before Zack Snyder released his director’s cut of the “Justice League of America” (JLA), they were a unified force of superheroes brought together by DC Comics to repel and defeat the evil-doers in our universe. I was a pre-teen kid in those days loving comics, pure escapism fare.

In comic book form, the Justice League of America was created in March of 1960. During the dog days of summer, from the end of July into the beginning of August, when the days were too hot to do anything else but read, I imagined the possibilities of being one of the JLA. Hands down for me, the Flash was my favorite and still is today. Barry Allen, the fastest human being, was always racing around the earth, tying up loose ends and villains faster than you could say “The Flash!” As an original member of the Justice League of America, the Flash joined forces with the likes of Superman and Batman and, as for the rest, you can probably rattle them off in your head.

For this blog, I’ve started to assemble an elite group that I refer to as “The Justice League of Art”—a group content to operate behind the scenes, for the most part just under the radar, but who provide vital acts of artistic merit in making our Harrisburg world a better place and a more vibrant community. More often than not, it is the unsung among us that provide a knockout punch. And some even wear masks (beyond the expected norm due to mandates). Back in March, a masked figure was revealed on Instagram dressed stealthily in camo gear who ended up being covered in all colors of paint. What started out as a photographic shoot by “it’s James,” aka James Kleppel, an artist of multidimensional talents who was none other than Grace Robinson. She operates under the nom de plume color.ur.soul, revealing her rhapsodic revelry as an artist covered in paint from head to toe. Follow the trail of the paint splatters, and they will lead you to this artist of kaleidoscopic color. Grace paints with wild abandon as well as creating items of self-defense with her usual flair of artistic elements adding to the functionality of her pieces. A recent endeavor is her “gnomes from home” art. A superhero indeed; she is Soul Siren. Look and listen for the Splat!

Larry Washington, Jr., aka Larry Lenzz, zeros in on the subject matter like an auteur creating his own mise-en-scene. Whatever catches Mr. Washington’s fancy becomes malleably photogenic under his aperture’s gaze. From cityscapes to the state Capitol building to towering church spires and painting-worthy photographs of the Susquehanna River, there’s nothing that Larry’s lens doesn’t capture to a “T.” Picture a broad-reaching wingspan. With his hawk eyes, he is able to scoop the “seen.” Often operating under the cover of night, Larry is known as Nighthawk. Whoosh! 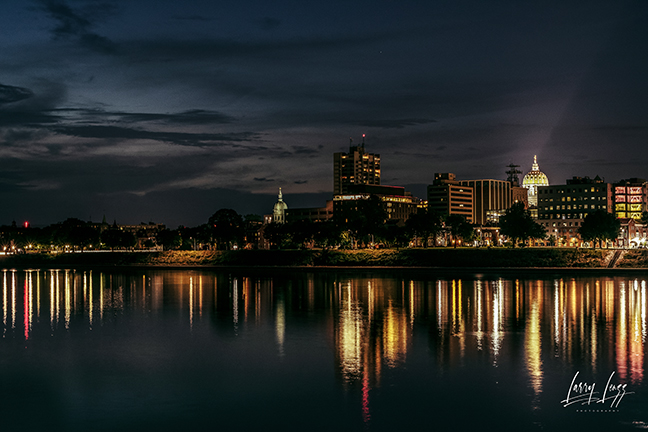 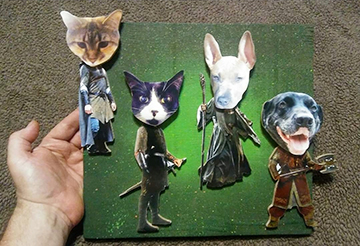 Keegan Beinhower, automobile modifier by day and artistic atom bomb by night, this next superhero already embodies his character’s name, aka “Atomic Keeg,” as his calling card on Instagram. He blows things up like pet’s heads to oversized proportions. No, he does not harm any animals in the process but enlarges their photos, their “headshots,” so to speak, in model parlance to take on film roles like a Star War’s galaxy photo with the pets wielding light sabers. If inspired to do so, share your pet’s photos with Atomic Keeg, and he will blow them up on a movie set piece of art for a one-of-a-kind treasure to hang on your wall. Another element in Atomic’s oeuvre is his latest creations, dinosaurs made from metal car parts. They are comprised of scrap steel left over from making dune buggies and sand rails. For example, the head of a stegosaurus was part of a tool, a hydraulic spreader. His prehistoric art and more can be viewed at the recently reopened Gallery@Second. Ka-boom! Add another femme fatale to the roster of the Justice League of Art in the guise of Bethany Nicholle, author and artist. Bethany concocts a gallery of abstract paintings, displaying unexpected unions of color and texture that lead to a narrative purely of her own design. More often than not, she shrewdly markets them as accessories on a smaller scale, such as magnets and key fobs—just about anything she can dream up. A favorite choice is her tongue-in-chic wearable masks, perfect for the age we are living in. A published writer, Ms. Nicholle pursues poetry and writes short stories found in her works Amour Fou, The Endeared and the Damned and The Darkness Behind the Shadow. Always on the prowl for inspiration, this artist operates as Catwoman, an expert thief that is best known for stealing Batman’s heart. Meow.

For now, this foursome of artists operates as inhabitants of a space and time continuum leading a dual life as superheroes imbued by powers beyond the norm. Although, at first glance, they appear just as you and I. Look for more Justice League of Art members to be showcased in the months ahead as Bob’s Art Blog may periodically reveal more secrets and superheroes of the Harrisburg art universe. It’s summertime, and the reading is easy. Let your imagination run wild and always look up. You never know who or what you may see.

If the title sounds confusing, think of this chapter of the Millworks artists as a new Pennsylvania Lottery game, “Pics Six.” Actually, Gus told me that there is something too similar already. This select group of a half-dozen freethinking artists is featured on the main lobby wall and in their respective studios that runs through Aug. 15. In alphabetical order, the artists start with Rebecca Adey and her ModSew Designs. Ms. Adey creates her own Peaceable Kingdom with three-dimensional “paper cut portraits and plush mount sculptures,” works of critters and creatures both imagined and real with her lovable and adoptable animals. Remember when cartoon characters burst through the Looney Tunes logo before the reel started? Look for Rebecca and her ModSew Designs menagerie in Studio 215. Her delightful designs will bring a smile to your face as well with whimsy and wonder. 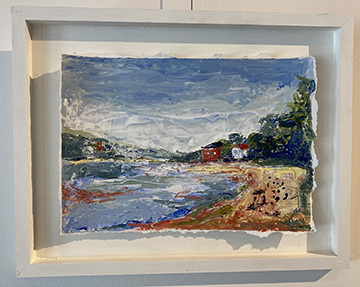 Diversely talented Amie Bantz is an artist constantly changing her approach to how she thinks about and presents her art to the public. Drawing on her professional expertise as an art instructor for the Carlisle School District, Amie consistently brings a new dimension and subject matter to the foreground. Switching from her Asian American heritage iconography for Millworks Spring Preview, just months later she now is exhibiting floating, torn-edged watercolor images with a nod to yesteryear in the vein of “postcard ephemera.” Her scenes of Montserrat and other ports of destination deliver serenity and sunshine in just the right dose. For more of Amie’s works, drop into Studio 322.

As the full-time art and gallery educator and coordinator of visual arts at the Milton Hershey School, John Davis is skilled at wearing many artistic hats. Accustomed to working in many mediums, John applies his talents in ceramics, mosaics and found objects, as well as working in oils, acrylics and ink studies. He is the past president of the Hershey Art Association and has served on the board of directors of the Art Association of Harrisburg. He puts his personal stamp on reclaiming nature with his down-to-earth, of-the-earth shadow boxes for this Millworks show. Mr. Davis embodies his motto, “find…and live…your passion.” John can be found in Studio 321. 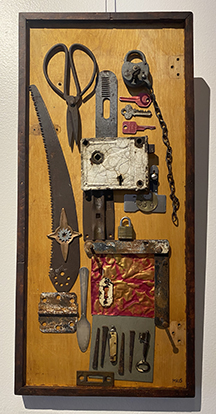 Mary Gelenser of Studio 319 finds inspiration in the castoff treasures of old stuff, fabrics, papers and hardware. Mary Kay takes pieces of this and that and works her magic as an alchemist/artist, turning one-of-a-kind assemblages into gold. In the current show, she assembles locks and hasps that hold the key to the imagination. Assemblage art unifies found objects or items incorporated with specific intent to create a composition that can take on symbolic meaning. Mary Kay puts aside any notion of an arts and craft approach, demonstrating inordinate skills in attaining a deeper aesthetic within the context of the entire work. 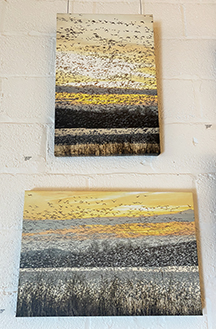 Paul Vasiliades, Harrisburg fine art photographer, enters the third dimension for the Millworks show by pioneering the vastness of technology in art. This is greatly evidenced in his series of expansive landscapes. Site-specific locations from World’s End to Skyline Drive in the Shenandoah Valley open the possibilities of future travels with their rich detail and natural beauty. He offers a sense of the surreal in his photographs of avian adventures with birds taking flight across a golden sky that surely would have inspired Hitchcock. In addition, Paul is an award-winning wedding photographer, and his portfolio can be viewed in Studio 211. Painter Ann Benton Yeager, found in Studio 103, employs bursts of boldness in her color-laden cold wax and oil paintings. Her depth of texture draws one into the narrative of dreams and details, vivid with dramatic pools from her palette full of emotion. A descendant of American artist, Thomas Hart Benton, this Millersville-born artist is fluid in all aspects of abstract art. Subscribing to a color wheel of favorites, Ann is a contemporary artist who specializes in mixed media works that incorporate hot wax or oil paintings. Benton Yeager is also a published author and art instructor.

This sextet at Millworks weaves a spell that you will be glad to fall under for the next three weeks. This powerful show is one you won’t want to miss. And mark Aug. 7 on your calendars now as it denotes Millworks First Saturday, a time to visit and chat with the artists in their studios.

Most photos by Jana MacGinnes