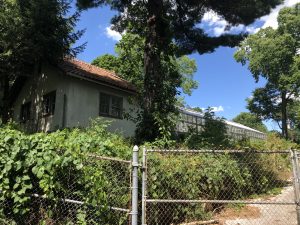 The Reservoir Park Greenhouse Project continues to blossom in Harrisburg, as the working group steering the restoration seeks community input and participation.

On Thursday night, members of the project held a town hall to discuss plans for the greenhouse and to update the public.

“We want to make sure we are doing things that people in the city agree with,” said Christopher Nafe, the city’s sustainability manager.

The project includes the restoration of a 1,500-square-foot greenhouse built in 1929 and about a half-acre of garden space surrounding it. This area on the south side of Reservoir Park sits just off Whitehall Street. The Reservoir Park Greenhouse Project is an initiative of the Harrisburg Parks Foundation, a project of The Foundation for Enhancing Communities. They are working to make it function again, after it sat idle for 20 years.

“A lot of people are excited to see something being done,” said Rafiyqa Muhammad, a member of the City’s Environmental Advisory Council and the owner of Sustainable Human Environment, who has been a member of the greenhouse renovation working group since its inception. “It’s an educational site, and we will always learn something when we come up there.”

Muhammad said the gardens and greenhouse will provide access to healthy fruits and vegetables for residents in the surrounding Allison Hill community, as well as teach them how to grow their own food.

“The Black community really deserves a state-of-the-art greenhouse,” she said.

The project will focus on landscaping, preparing garden beds and planting seeds first, with work on the greenhouse to follow, Muhammad explained. Eventually, the group hopes to renovate the Brownstone Building near the greenhouse for use as a food demonstration kitchen, Nafe said.

Funds for the project are already coming in through private donors like the Whitt Family Foundation, which has given $50,000 and the Rotary Club of Harrisburg, which donated $5,000.

Nafe said they are looking into applying for grants, as well. They have already received a $25,000 “Better Food, Better Access, Better Together” grant from the Central Pennsylvania Food Bank.

While planting won’t begin until spring, Muhammad and Nafe said they will be hosting community workshops on topics like composting.

“People seem excited about the idea of growing food in the community,” one Harrisburg resident said.