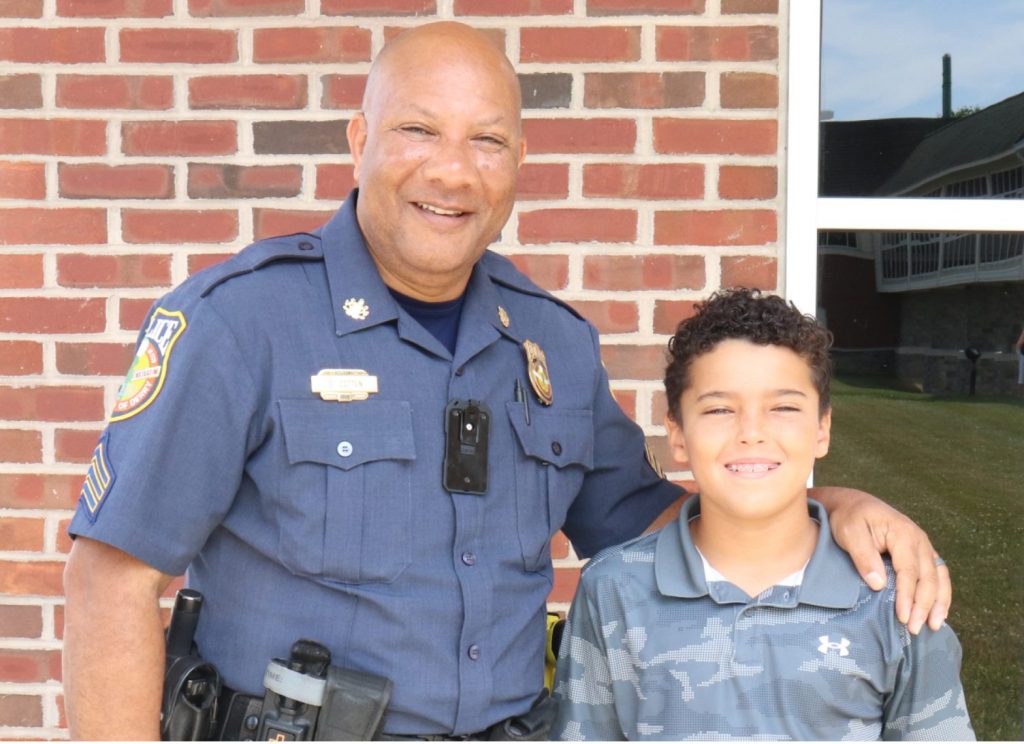 “Bo was in second grade when we started having lunch together once or twice a month, then going out to recess together,” Cotten said. “We were a perfect match, instantly, because he’s a little athlete, into the same sports I’m into—football, baseball and basketball.”

“But I’d start playing out on the playground, and you’d start to see the barrier coming down,” Cotten said. “More and more kids would come hang out with us.”

The next year, there was a breakthrough.

“One day, we were at lunch, and all the kids were asking Bo, ‘Can I sit with you?’ And there was one seat left at our table. I tear up every time I tell this story because there was a kid sitting all by himself. And it was nothing I said to Bo, but he went over and asked that kid to sit with us.”

Cotten paused for a moment, remembering.

“The smile on that kid’s face, and to watch Bo go over to someone sitting by himself—was that part of Bigs in Blue? I don’t know,” said Cotten.

But you could tell, he wonders.

Bo, who’s now 11, was adopted by his grandparents when he was 5.

“Bo struggled at first after he left his mom and dad, and we were looking for support to help him through that. I was very excited when I found out his teacher had recommended Bo for this program,” said his grandmother, Betty Jane Condron, of Derry Township. “Bo really respects Darren, and I love that Darren is a super good role model for Bo.”

The pair hit it off so well that they were approved to meet regularly off school grounds—at Cotten’s home, area pizza shops and Bo’s sporting events.

In fact, Cotten said, “My wife and son are always asking, ‘When is Bo visiting again?’”

Regionally, Bigs in Blue flourishes under the umbrella of Big Brothers Big Sisters of the Capital Region (BBBSCR).

“Our goal is for kids to have a mentor that lasts a lifetime,” said Amy Rote, BBBSCR’s president and CEO, who established Bigs in Blue in central Pennsylvania. “It’s been my baby. It really started in 2014 with Ferguson [and the shooting of an 18-year old Black man by a white police officer]. I was receiving calls from ‘bigs’ asking, ‘How do I help my ‘littles’ be safe?’”

She started talking to area police departments, and Swatara Township was the first to come on board. BBBSCR’s Bigs in Blue officially launched in 2016.

“We have a region that’s really committed to giving back to kids and trying to build relationships—it just needed the structure [of Bigs in Blue],” Rote said.

Elizabeth Goodman is BBBSCR’s full-time Bigs in Blue coordinator. Her background includes several years of teaching experience, at Harrisburg’s Benjamin Franklin Elementary, then Yellow Breeches Educational Center—a private school for students struggling in their districts due to mental health and other diagnosed conditions.

“My grandfather was a police officer, and when I saw the Bigs in Blue position posted, it struck a chord with me, knowing the importance of relationships with police officers,” said Goodman, who personally interviews—and matches—officers with youth.

“Bigs get to learn about their littles and the struggles they’re facing, and littles get to realize their bigs are real people,” said Goodman. “The overall goal is to grow the program. We’re constantly bringing on new departments and expanding.”

Mentorship on the Map

BBBSCR currently has the second-largest Bigs in Blue program in the nation, in terms of the number of participants, behind Miami.

However, when it comes to the number of police departments engaged, BBBSCR leads the country. Thirteen area police departments spanning five counties, plus Pennsylvania State Police (PSP), participate in Bigs in Blue, through a total of 36 officers, with more than 20 additional officers awaiting matches this coming school year.

East Hempfield Township police recently became the first Lancaster County department to participate—“and four officers had their applications to me on the first day,” Goodman said. “That’s a moment that stands out for me, because it shows how much officers want to impact the life of a child.”

But the impacts radiate even further, beyond brotherhood into neighborhoods.

“Sometimes, the kids can change a parent’s outlook on police, or other kids’ outlooks,” Cotten said.

PSP Lt. Adam Reed has volunteered with Bigs in Blue since the beginning. He’s currently matched with 11-year old De’Von, who moved to the area last year.

“Making new friends at a new school is always going to be a challenge, no matter who you are,” Reed said. “So, it was my hope that I could make that transition easier for him.”

Ultimately, does this program, Bigs in Blue, have the ability to change the narrative—to impact and improve relationships between today’s youth and police?

“Yes, you hit the nail on the head—it definitely has the potential to change the narrative and make positive impacts with Pennsylvania’s youth,” Reed said. “That’s important today, more than ever. Traditionally, people interact with police when they’re having their worst day. So, it’s really refreshing on our end to interact with the community in a positive way, and this program allows that.”

To learn more about Bigs in Blue and Big Brothers Big Sisters of the Capital Region, visit
capbigs.org.