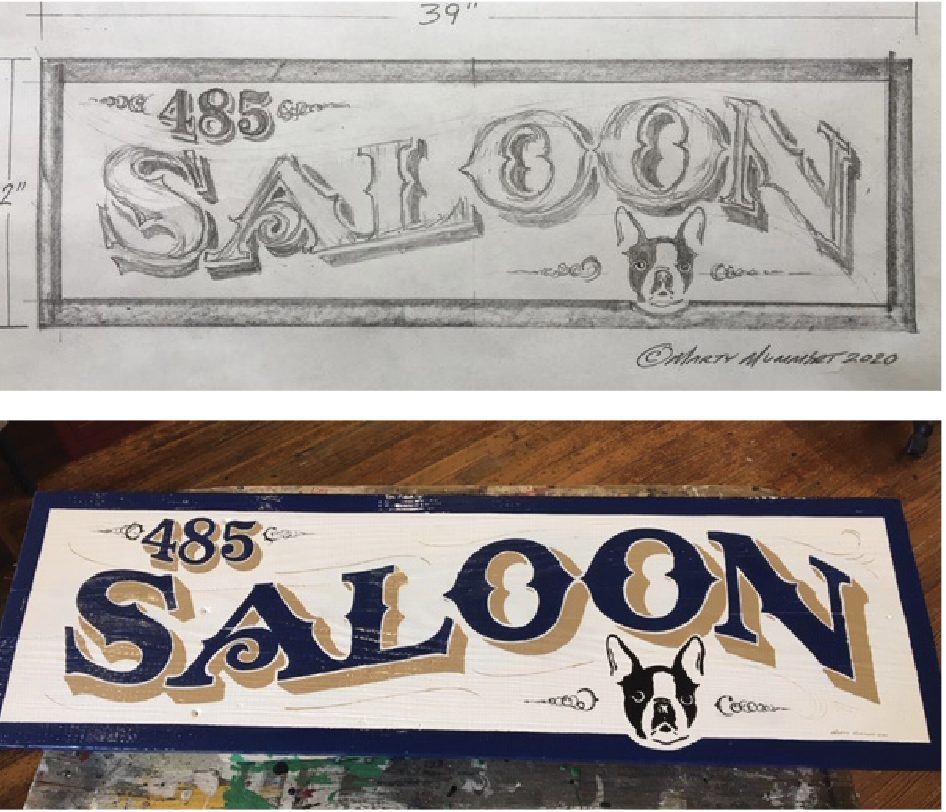 Back in the ‘80s, Marty Mummert took a string of odd jobs, including a position with a sign company.

“They said everything was going digital, and I said, ‘That can’t happen—I gotta learn how to hand paint signs,” he said.

Mummert, who had recently come out of the Air Force, took up a new calling. He felt like it was his duty to preserve the time-honored, hand-lettered craft of sign making.

His first hand-painted sign, created on plywood, was for a shop in Newport News, Va.

And so it began—Mummert worked at the sign company, which was turning digital, during the day, while he continued plying his old-fashioned, hand-painted trade on the side, after hours.

“I think I’m an old soul—I really do,” Mummert said. “I look at how things were—and I might be stepping on toes—but we just accept stuff today. I mean, is there any character or creativity left?”

Sign making was a side hustle for many years. Mummert bounced between jobs with Coca-Cola, a potato chip company and truck driving. Sign making added to his colorful resume.

Every Marty Mummert sign was and is an original that begins with a pencil sketch, measurements and dimensions calculated meticulously. He calls the process “pencil to paint.” The finished product comes to life with vibrant, oil-based paint, a sign painter’s brand called “One Shot Paint.”

One of his first big breaks came during a trade show in Atlanta.

“A buyer from Spain gave me his business card—it said Anthropologie. I didn’t even know what Anthropologie was, but he called the next week and asked if I could handle several thousand rusted metal signs—2,600 for all their stores. That was pretty flattering,” said Mummert.

That was followed by signs for Bubba Gump Shrimp Company, Cracker Barrel, an episode of “Unwrapped” with the Food Network and Disney movie “Invincible.”

Mummert talks about it all with an “aw, shucks” attitude.

“Oh yeah, I got to do couple jobs for Starbucks, too. I’m pretty much flattered when anyone wants a sign, whether it’s someone from Hollywood or someone who walks in my shop,” Mummert said. “I guess I’m finally doing what I’m supposed to be doing.”

Today, at the age of 61, he’s painted hundreds of projects for clients around the globe. Marty Mummert signs hang in national and international businesses, as well as small businesses along Main Streets throughout America. His artwork has appeared on television, in movies and music videos, on pickup trucks, barns and murals.

How fitting is it that Mummert’s shop is located in one of America’s most famous historic towns, Gettysburg?

His handiwork paints the town—no small feat for a town as historically correct as Gettysburg.

“Signs in Gettysburg have always been viewed as a significant contributor to a positive experience, either walking or driving through the historic town,” said Gary Shaffer, of Gettysburg’s Historic Architectural Review Board (HARB). “For many years, HARB has championed unique and especially well-crafted signs—they need not be historic in design, but thoughtful and artful. The streetscapes in Gettysburg have been enriched in the last several years by the careful, creative designs of Marty Mummert.”

“It’s hard to find craftsmen like Marty any more—it’s a dying breed, sadly. He breathes life back into authenticity and craftsmanship,” Grim said.

Mummert is well liked among Gettysburg shop owners, and the feeling is mutual.

“Gettysburg has received me pretty darn well,” he said.

As you can probably tell, it’s not just Mummert’s talent that customers enjoy—it’s also his personality.

One of Mummert’s recent, larger projects involved hand-lettering “The Barrel House” directly on the third-story bricks of the downtown Chambersburg landmark and venue.

“Marty is an inspirational artist… he is so kind,” said Dr. Joshua Dunklebarger, who owns The Barrel House. He described Mummert’s work as “timeless.”

In the Driver’s Seat

One of Mummert’s biggest projects was for Okoboji Classic Cars—a car museum in Iowa.

“It was a 22-hour drive, and I went out for three weeks at a time, then came home for two weeks at a time,” Mummert said. “It’s built like a downtown, with all the signs painted by hand. That was probably one of the most memorable projects.”

How does the saying go? If you love what you do, you’ll never work a day in your life?

“The very fact that I do it by hand makes it fun,” Mummert said. “I go home every day with a smile on my face.”

Like his signs, he’s a classic, full of character.

“I’m just flattered that you’re writing a story about me,” said Mummert. “I don’t know who will read this.”